This tutorial shows step-by-step, how to separate the different frames of a multi frame image typically acquired with systems containing a fast Galvo scanner. In this tutorial, an image showing partially moving giant unilaminar vesicles (GUVs) is processed with the multi frame FLIM script. Only a few subframes are combined for analysis. The result is exported as an image series.

Note: The “Samples” workspace is delivered with the SymPhoTime 64 and on the CD-ROM and contains example data to show the function of the SymPhoTime data analysis. If you haven't installed it on your computer, copy it from the DVD onto a local drive before going through this tutorial. 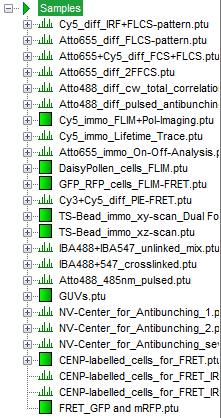 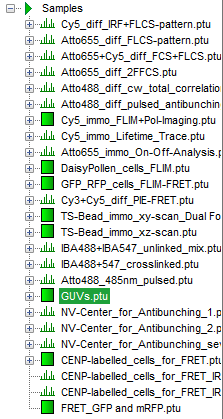 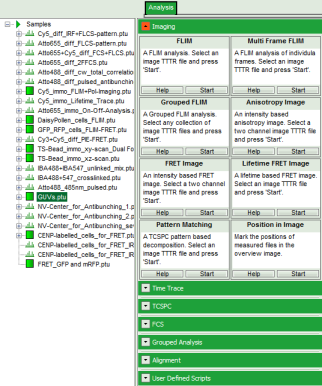 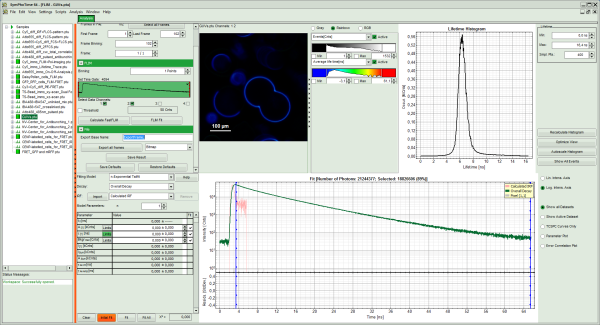 Note: Reasonable limits can either be found by dragging the limit bars in the color scale “Fast Lifetime” histogram or by considering the peaks of the “Lifetime Histogram”. Entering fixed values has the advantage that different images can be compared later.

Response: The intensity and color scale in the image adapt.

Note: The image shows giant unilaminar vesicles (GUVs) labeled with a lipid labelled derivative of nitrobenzoxadiazole (NBD). This dye has a longer lifetime when incorporated into the ordered domains of the GUVs compared to the – much stronger – incorporation into the disordered domains. For demonstration purpose of this tutorial, the most important feature of the image is that not all GUVs are completely stationary during the imaging process indicated by blurring of certain GUVs.

Select the Processing Options and create and export an image stack

Note: The fitting parameter table indicates that the image consists of 102 individual frames. By default, a frame binning of 102 is selected. Thus, the measurement is plotted as one image containing all frames. 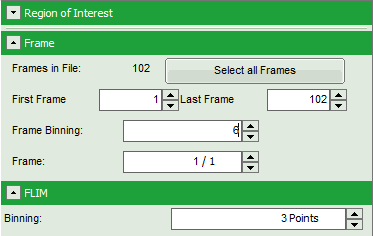 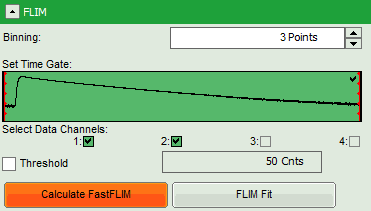 Note: The image contains data from two detectors, and both are selected for analysis. In this measurement, the fluorescence was separated by polarization, therefore, photons from both channels can be included for lifetime calculation. 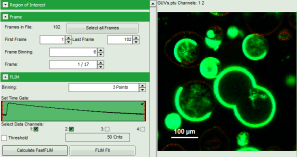 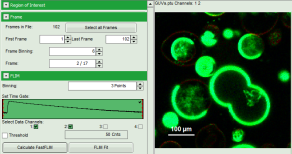 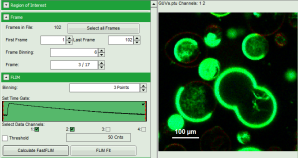 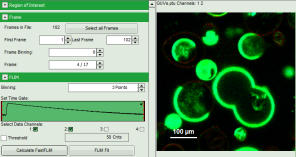 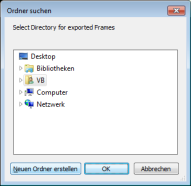 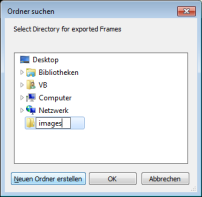 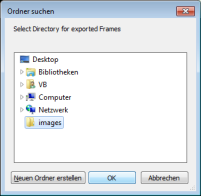 Response: 17 images are exported as .bmp files into this folder. One can import them into other graphic programs, e.g. to create movies.

Note: The images are exported as shown in the SymPhoTime 64 window, e.g. including the scale bar. If data are acquired with a scanner controlled by the SymPhoTime 64 software (i.e. the piezo scanner in the MicroTime200), the image dimensions are automatically correct. If the image is acquired using an external scanner, the image size has to be defined or transferred before the measurement to make sure that the measured image dimensions are correct. Otherwise, one pixel is considered to a size of 1 µm. If the image scaling should not be displayed, put the mouse cursor over the image, open the context menu with a right mouse click and unselect the option “Show ScaleBar”. When the scale bar is not displayed, the exported images also do not contain the scale bar.

Response: A result file is generated which is assigned to the raw data file. Double click on this .pqres file opens it in the same way as it was stored.

Note: If not only the Fast FLIM image should be exported, but also a pixel-by-pixel fit for the whole stack is needed, a procedure according to the tutorial: Lifetime fitting using the FLIM Analysis must be applied. Please follow the instructions as described there in an analogous fashion:

When performing a pixel-by-pixel fit in the “Multi Frame FLIM” script, keep in mind that many more pixels as usual need to be fitted. In this example, 17 images have to be analyzed, which can be quite time consuming. Therefore, it can be helpful to limit the number of calculated pixels via ROI selection. The usage of the ROI selection tools is described in the script ROI fitting using the FLIM script.
By default, the ROI is only applied to the displayed image, and not to all other images in the stack. If the ROI should be used in all images of the series, first check “Select in all Frames” and then mark the ROI.