Note: The “Samples” workspace is delivered with the SymPhoTime 64 and on the CD-ROM drive and contains example data to show the function of the SymPhoTime data analysis. If you haven't installed it on your computer, copy it from the DVD onto a local drive before going through this tutorial. 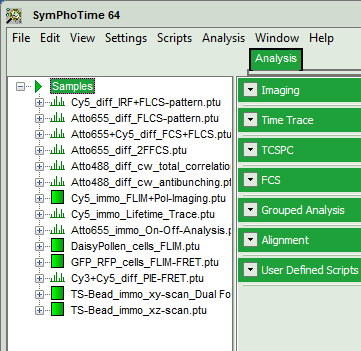 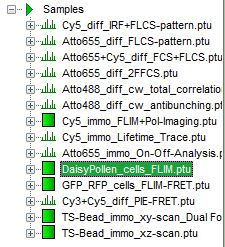 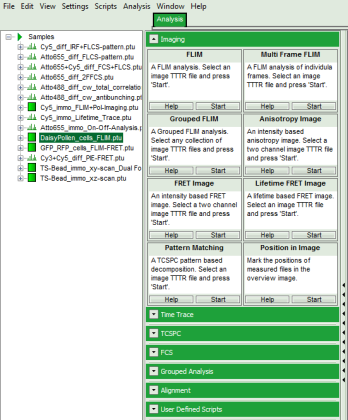 Response: The FLIM script is applied to the file DaisyPollen_cells_FLIM.ptu. Thereby, a new Window opens: 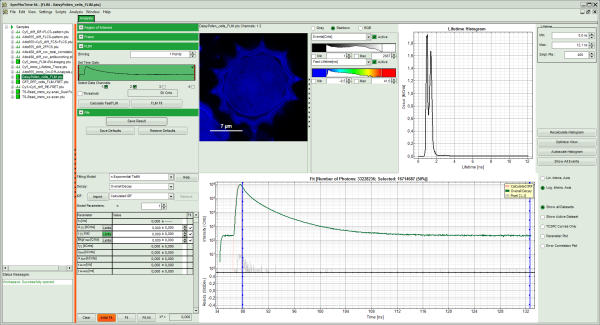 Note: The default lifetime scale stretches from -0.5 to 41.6 ns. The physically impossible value of -0.5 ns is explained by the fact, that SymPhoTime places the 0 value at the rising edge of the decay in the TCSPC window. As a mean arrival time is calculated, it is possible that in dark regions only one or two photons caused dark count noise are detected which are randomly detected before the laser pulse in the TCSPC window.
Reasonable limits can either be found by dragging the limit bars in the color scale “Fast Lifetime” histogram or by considering the peaks of the “Lifetime Histogram”. Entering fixed values has the advantage that different images can be compared later.

Response: The color scale in the image adapts and lifetime contrasts in the pollen become visible. 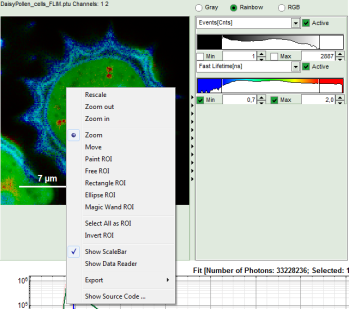 Note: The different ROI tools are used in the following way:
Paint ROI: highlights the pixels the mouse cursor is guided over while the left mouse button is activated. The faster the cursor is moved the broader is the area of pixels highlighted around the mouse.
Free ROI: moving while keeping the left mouse button activated marks the area within the drawn shape.
Rectangle ROI: to draw rectangular ROIs.
Ellipse ROI: to draw elliptic ROIs.
Magic Wand ROI: when activated, clicking activates all neighboring pixels with a similar Fast Lifetime. Especially useful for marking spotted structures. 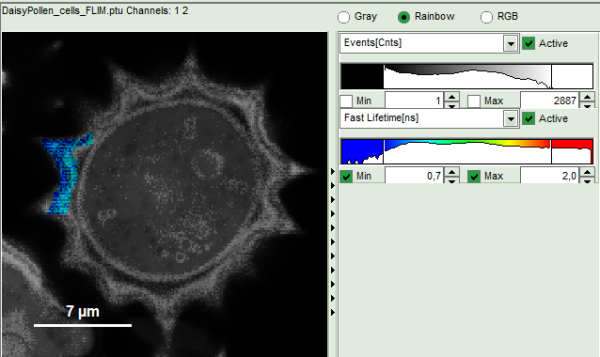 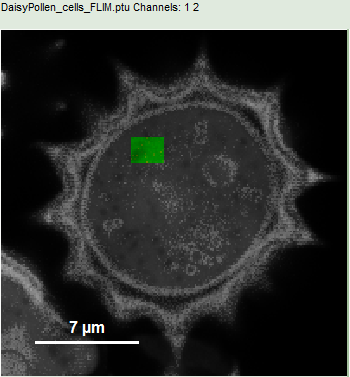 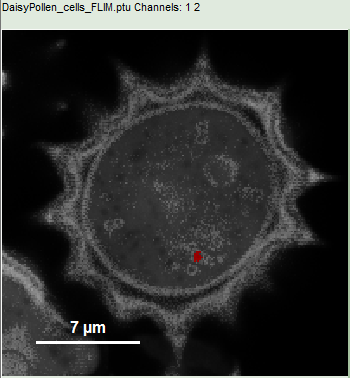 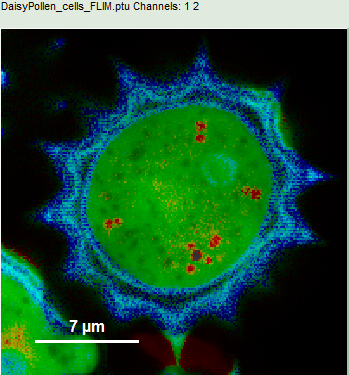 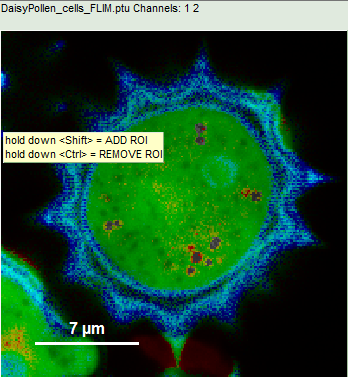 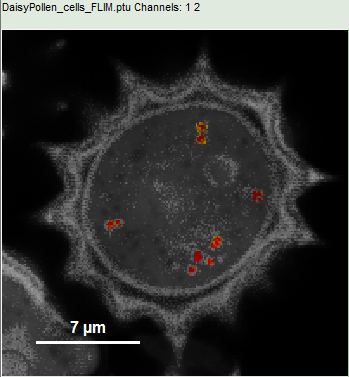 Response: Now only the red dots of the pollen image are highlighted, everything else is greyed out. The decay corresponding to ROI 2 contains now the photons from all marked dots.

Note:
To review the different regions, go to the drop down menu “Regions of Interest” and change the number between 0 and 2. The image will display the corresponding image with the selected ROI.
To export the images with a marked ROI, keep the cursor over the image with the selected ROI, open the context menu with a right mouse click and select one of the export options:
Bitmap exports the image as a bmp file. If the scale bar is displayed, the image including the scale bar is exported.
Bitmap with color scale exports the image as a bmp file including the intensity and color scale next to the image.
1×1 bitmap exports the image as a bmp file with one pixel of the image being exported as one pixel in the image file. In the other bitmap export options, the image is exported as displayed.
ASCII exports the image as ASCII array using a text file format. Thereby one array encodes the intensity values, while a second array encodes the Fast Lifetime values. After removal of the header and the unwanted array, individual arrays can be imported in graphic programs, e.g. ImageJ as a text image. These images contain the full count resolution of the raw image.

Perform a Lifetime Fit on the Selected Regions (ROIs)

Note: The software offers the possibility to fit the data using a n-exponential tailfit or a n-exponential reconvolution fit. A tailfit can be used when the fitted lifetimes are significantly longer than the instrument response function. A reconvolution fit is usually preferable, because the complete decay is fitted, while for a tailfit, the start of the fitting range is usually a bit arbitrary.
For explanation about the fitting model and the used equations, click on the “Help” button next to the selected model. This opens a help window containing the fitting equation and the explanation of the different parameters.

Note: Usually, a decent fit is characterized by the following criteria:
The fitted curve overlays well with the decay curve. In the residual window, the values spread randomly around 0.
The χ²-value approaches 1.
The calculated fitting values are reasonable.
Usually the fitting model with least parameters is selected.
In this example it is obvious that the applied single exponential reconvolution fit is not suited to fit the decay curve.

Note: On the x-axis, the dataset name is plotted. The order is the same as in the decay menu:
1 = Overall decay, generated from all photons of the image.
2 = Pixel decay, including the photons from the last selected pixel.
3 = ROI 0
4 = ROI 1
5 = ROI 2

Response: A window opens, asking for a file name to store the fitting values. The data are stored as a .dat file. 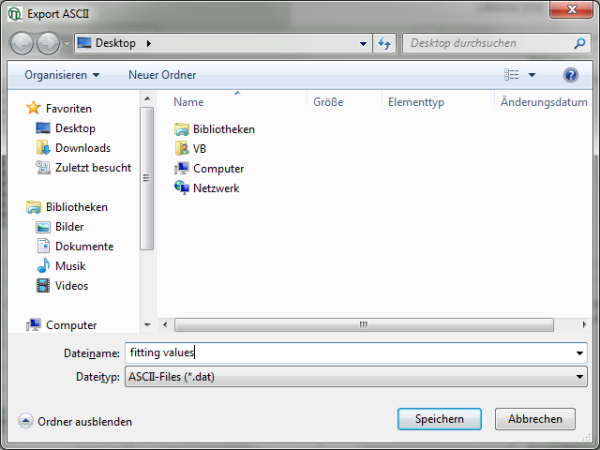 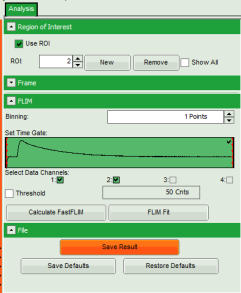 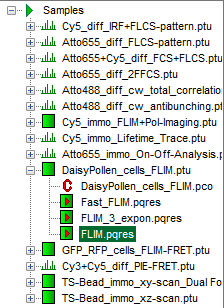 Note:
This tutorial explains only a subset of the functions of the FLIM script. Also check the script explaining pixel fitting (Lifetime Fitting using the FLIM Analysis).