How to Perform Antibunching Measurements

During Antibunching Measurements the afterglow effect of the SPADs may become visible as (un)expected additional peaks near the expected antibunching dip (see figure 2). These peaks might be useful to find the location of the dip, they are however artifacts caused by photons emitted (after the detection of a genuine photon) by one SPAD detected by the second SPAD. The distance of the expected dip and the afterglow peak is characteristic for the setup.

To get rid of the afterglow peak it has been proven useful to introduce 2 identical bandpasses directly in front of each SPAD and to use a 50:50 beamsplitter plate instead of a beamsplitter cube or to misalign the detectors slightly.1) 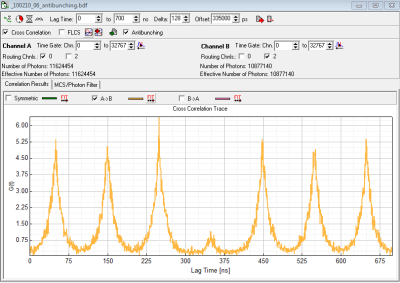 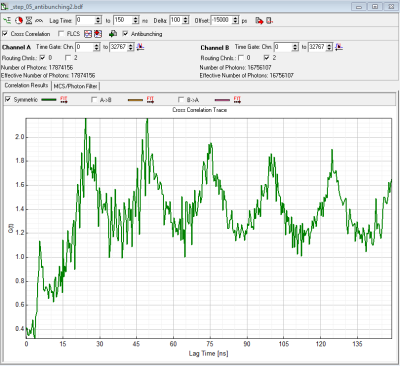 Figure 2: Correlation of Antibunching Measurement. Sample Diamond NV centers. Laser repetition rate 40 MHz. Note the peak near the expected dip at lag-time=0 due to SPAD afterglow. Compared with figure 1 the expected dip has not been shifted to the center of the x-axis and the emission bandpasses have not been placed directly in front of the detectors but in the emission filter wheel in front of the tube lens.

Some MT200 based literature about Antibunching