The following steps describe how to perform a Pattern Matching Analysis on raw data. This allows for separating different dyes or regions of different lifetime/decay-behavior in a sample. 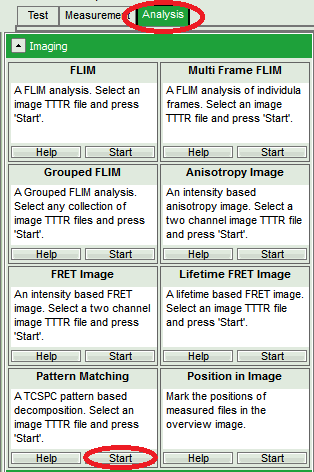 Response: The software calculates a Decay Diversity Map, a simple intensity image and an overall decay from the raw data file.

Note: Once an image is generated, the next step is to select the patterns which are to be used for decomposing the image. 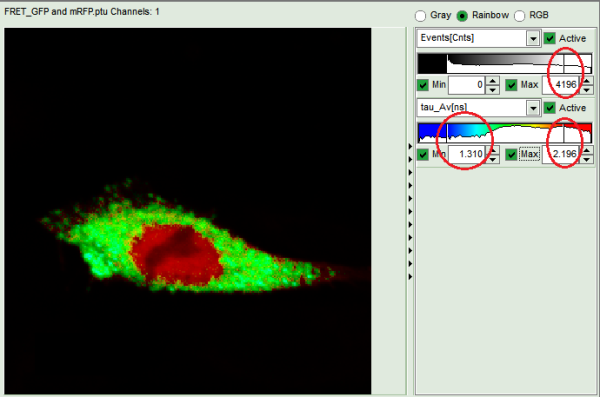 Response: The image now clearly shows two populations of different lifetimes. This means, that probably two patterns are sufficient to fit the image.

Note: Have a look at the Decay Diversity Map. This new feature tells you more about the different populations in the picture. The Decay Diversity Map is a 2D histogram. The x-axis shows a histogram of the average lifetimes of the pixels in the image. The y-axis shows a histogram of the Delta-Tau values of each pixel in the image.
This quantity relates to the deviation of the fluorescence decay from a mono-exponential decay. While a small value depicts a mono-exponential decay, a bigger Delta-Tau value indicates a multi-exponential one. 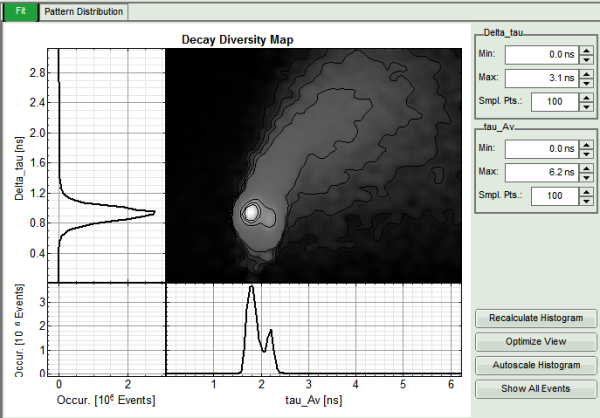 Note: In the example, two peaks in the average lifetime (x-axis) can already be seen. 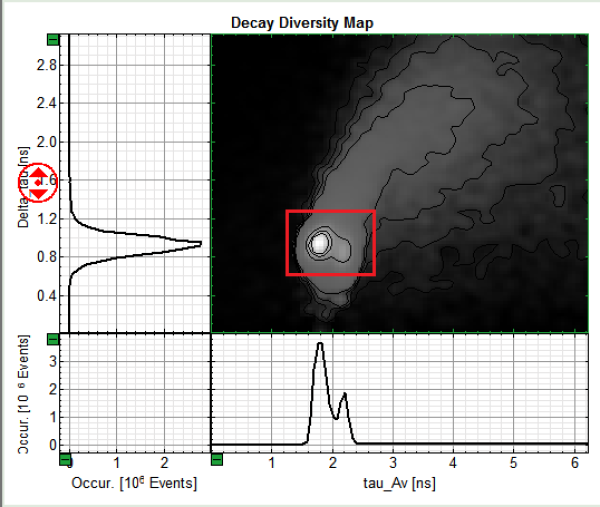 Response: The zoomed region is now displayed in the same resolution as before. 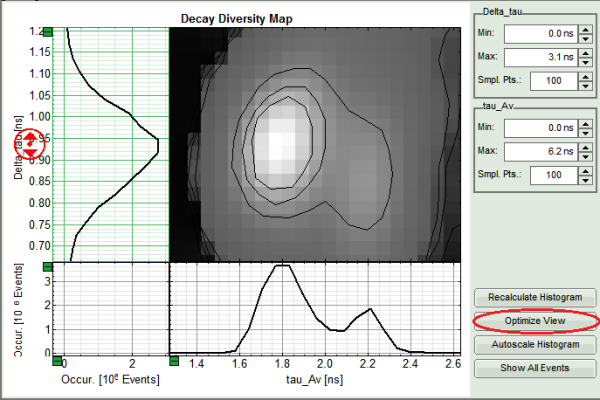 Response: More detailed contour lines are displayed. In our example the two populations and their different properties are depicted. The first population has a shorter lifetime and a slightly bigger Delta-Tau value compared to the second population. This indicates the first one to be the FRET population, as the lifetime is shorter and the decay “less” mono-exponential. The bigger deviation from mono-exponentiality results from the fact, that the molecules in question are composed of a mixture of one population performing FRET and an additional population of Donor-only or non-FRET molecules. The second therefore is the non-FRET population without any FRET performing molecules. 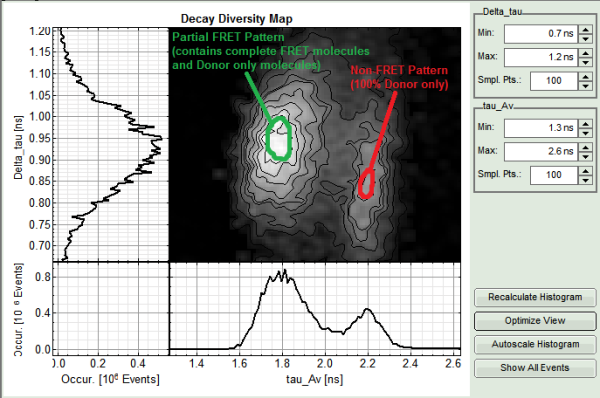 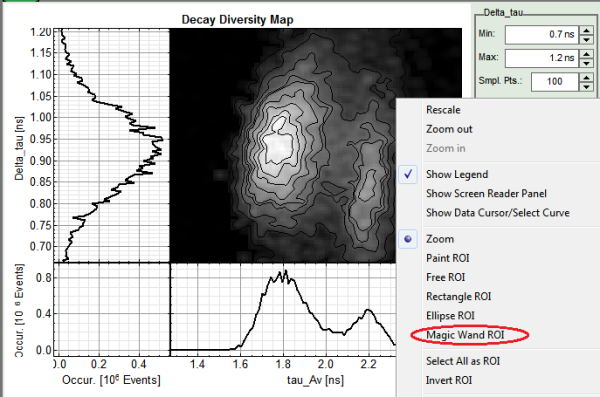 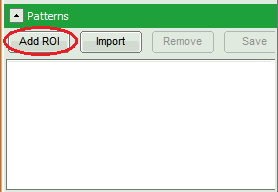 Response: The selected ROI appears as pattern in the box and its overall decay is displayed in the Patterns plot. 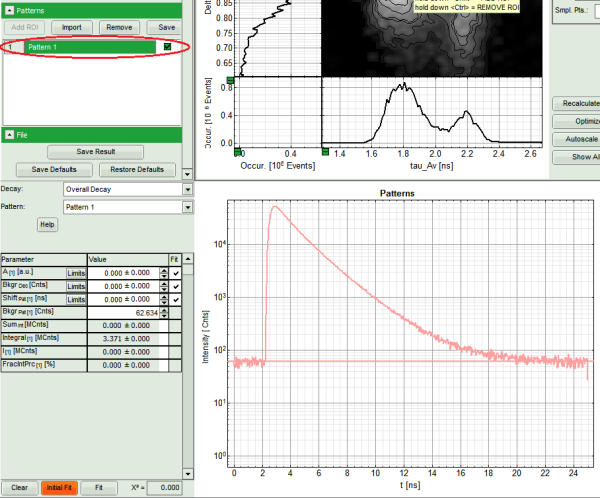 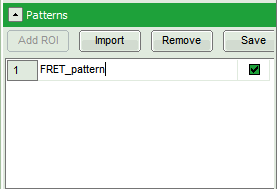 Note: Another option to acquire the patterns would be to select the different populations in the intensity image also using the magic wand ROI. Several non-connected regions can be selected by pressing the Shift-key while clicking. The procedure resembles the one described above.
Patterns can also be imported from other measurements. For more details, see Additional Information at the end of this step-by-step manual.
Patterns can be saved by simply clicking the save button in the Pattern box. This allows for analyzing them with the TCSPC Fitting feature and calculating the values of the average FRET efficiency and binding (not shown).

feature decomposes the overall decay (average over all pixels) into the user-defined patterns. This is done in terms of a linear combination. In general, for i Patterns it finds the corresponding amplitude αi:

In addition, a shift parameter can shift the decay in time.
If the residuals of the initial fit show no trend or outliers, it is safe to assume that the selected patterns suffice to describe the image and a Pattern Fit can be started.

algorithm is similar to the initial fitting one, but instead of decomposing the overall decay, it performs the decomposition on each pixel. The linear decompositions of the particular pixels give different αi's for every pixel.
After the fitting process a false color RGB image is displayed which shows the amplitudes αi of the first three patterns in three different colors for each pixel. 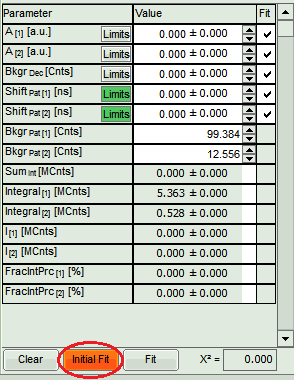 Response: Both decay-patterns, the overall decay and the resulting curve are displayed in the Fit diagram. The residual plot on the bottom should show no trends or big deviations in comparison to its noise level. This result shows that the image can be readily described by two different decay patterns belonging to two different species, the FRET and non-FRET population. The result would be even better by adding a background pattern (see Additional Information at the end of this step-by-step manual). From this result we can learn that the FRET pattern is composed of FRET molecules with only one specific FRET efficiency. Molecules with a different efficiency would result in deviations of the residual-curve and the need of a third pattern.

Response: The intensity image will be replaced by a pattern-fitted image. In this image the decay of each pixel is fitted by mixing the patterns. The pixel color is dominated by the most prominent pattern in the pixel-decay. In the Decay Diversity Map the location for each pattern is depicted in the same color as in the image.

Note: There is a lot of possibilities to tailor the Pattern Matching Analysis to your needs and the given sample. Here are some examples using the same demonstration sample as above.
If decay measurements of the different components are available, one can also import patterns from different measurements. 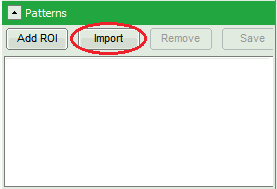 Note: This will import the overall decay of the reference measurement. Make sure the measurement contains only the desired component. To make a better selection of the pattern to be imported, open the external measurement (in the example “non-FRET sample.ptu”) in another Pattern Matching Analysis and follow the step-by-step instructions to extract the desired non-FRET pattern. 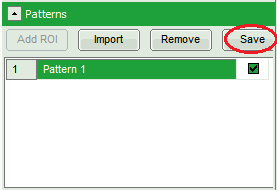 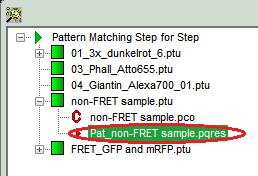 Note: The fit of the overall decay can be improved by using a background pattern besides the patterns for the different regions. 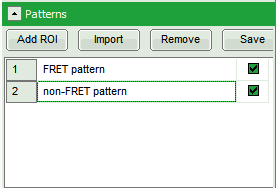 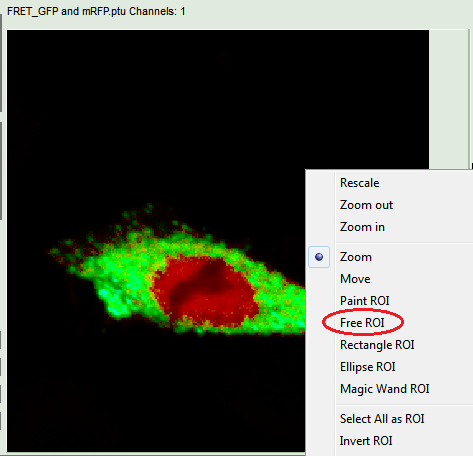 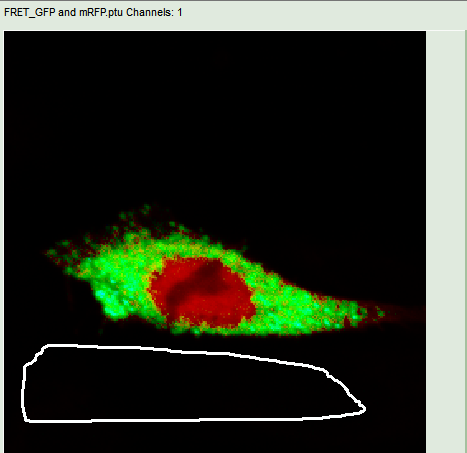 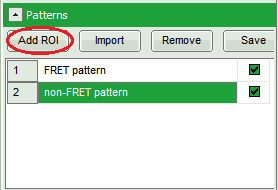 Response: The intensity image will be replaced by a pattern-fitted image. In this image the decay of each pixel is fitted by mixing the patterns. The pixel color is dominated by the most prominent pattern in the pixel-decay. In the Decay Diversity Map the location for each pattern is depicted in the same color as in the image. 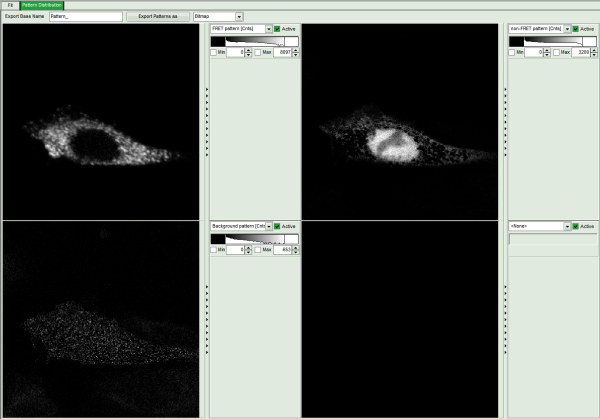