The Pile-Up effect describes the effects of photons lost at high photon count rates due to the dead time of the TCSPC devices.

Most single photon counting detectors and TCSPC electronics have a dead time. After registering one photon the device needs some time to be ready for the next photon to detect. The dead time for TCSPC devices used for the measurement of fluorescence decays are in the range of 25 to 90 ns.

Let's take as an example a laser repetition rate of 40 MHz. The fluorescence molecules receive every 25 ns a laser pulse. Considering the dead time we can detect only one photon after one laser shot. “Pile up” describes the effects of photons lost at hight photon count rates due to the dead time of the TCSPC devices. There are two effects:

Since the pile-up effect distorts the histogram, it must be avoided. To do so, the measured count rate should not exceed a certain limit in respect to the laser repetition rate.

For FLIM measurements, the count rate must be no more than 1 - 10% of the excitation rate. This allows the single photon statistics: The probability of detecting more than one fluorescence photon per excitation pulse is negligible.

Example of pile up effect

We have performed an example measurement with a fluorophore having a lifetime of 4 ns. At 20 MHz laser repetition rate and 2 MHz detection count rate (10%) and a total count number of 10.000 photons in the TCSPC histogram the following results are obtained: 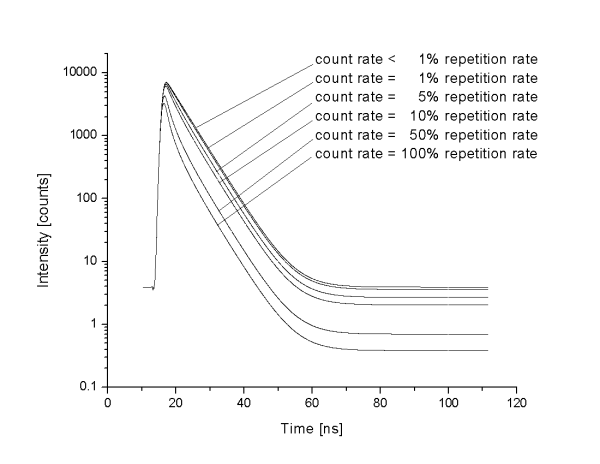