Some origins of multiexponetial decays for pure dyes

The fluorescence lifetime of a dye measured with a TCSPC spectrometer can be multiexponential due to many reasons. The most obvious cases are due to scattering or presence of impurities. Although less obvious, it is also widely known that in an inhomogeneous medium a pure dye will also exhibit a multiexponential decay. Advanced users know that if the decay is not measured with polarizers at magic angle, the rotation correlation time shows up as a second exponential in the decay (the second exponential is in fact the product of the rotation correlation time and the fluorescence lifetime, divided by their sum). And they also know that measuring without polarizers is not equivalent to measuring at magic angle… But suspicion may arise when even a pure dye measured at magic angle in a homogeneous medium exhibits a multiexponential decay. Is the spectrometer properly adjusted? Are the polarizers properly calibrated? A typical mistake is to measure the IRF at the nominal laser wavelength instead of measuring at the ideal wavelength for that specific laser head. Note that all diode lasers heads emit at slightly different wavelengths and each of them have an optimum at which the IRF should be measured. As little as 0.5 nm displacement from their optimum may induce a “non perfect” deconvolution fit.

But it is worth noting that even at magic angle in a perfectly aligned spectrometer pure dyes in homogeneous media may exhibit a multiexponential decay. The origin may be physical, like solvent relaxation, or chemical, when the fluorescent molecule undergoes a ground or excited state reaction. In this brief article a few examples are described.

The fluorophore (A) may be reacting with the medium or with diffusing molecules dissolved in it (X) to form a product (B). Typical cases are dissociation reactions. These reactions can be followed by Absorption spectroscopy, where the different bands can be identified and assigned. Excitation in regions where the two species (A and B) absorb may lead to biexponential decays if the fluorescence of both compounds is observed at the same wavelength.

Note that this situation corresponds to the typical case of Static-Quenching in which the intensity of $A$ decreases with the concentration of $X$, but where the lifetime $\tau_A$ remains constant.

The electronic redistribution of electrons due to optical excitation leads in many cases to a different reactivity in the ground and excited states. In other words, a fluorescent molecule which is mostly inert in the dark may become reactive upon excitation. Common excited state reactions are redox (electron transfer) and acid-base (proton transfer) reactions. Depending on the rate of the excited-state reaction relative the the original fluorescence lifetime, the observed decay time measured with a TCSPC spectrometer may be single- or multiexponential.

Let us consider the reaction in Scheme 2 in different situations: 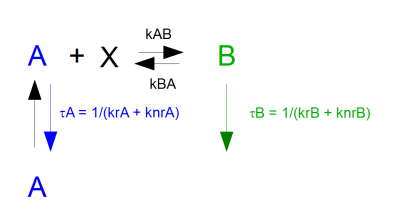 Starting point: The molecule A is promoted to the excited-state where it can react with a molecule X to form the compound B, through a rate constant $k_{AB}$. Once the compound B is formed, the back-reaction can occur with a rate constant $k_{BA}$. Compounds A and B are fluorescent with original fluorescence lifetimes $\tau_A$ and $\tau_B$. Once B decays to the ground state, the back-reaction takes place. Hence the system is always in its starting position $(A + X)$ prior to any excitation pulse.

Case A) The constant kAB is too slow with respect to $\tau_A$ and $\tau_B$. In this case the compound A would decay to the ground-sate before the excited-state reaction could take place. The decay measured would be single exponential and coincident with $\tau_A$.

Note that this situation is the typical case of dynamic quenching with the particular case that the product being formed is fluorescent.

Case C) The interconversion rate constants kAB and kBA are in the same order of $\tau_A$ and $\tau_B$. In this case, the decay curves measured for species A and B would be biexponential for both, with common lifetimes $\tau_1$ and $\tau_2$. However, $\tau_1$ and $\tau_2$ would not correspond to $\tau_A$ or $\tau_B$ , but would be a function of both and of their interconversion rate constants kAB and kBA, as well as of the concentration of X. The system would have to be solved mathematically. For a system like in Scheme 2 the time evolution of species A and B would be:

Note from $A(t)$ that, even if $B$ would not be fluorescent, the decay of $A$ will still be biexponential!

A situation like this may occur with molecules dissolved in an aprotic but hygroscopic medium, like acetonitrile. Water molecules may diffuse (diffusion happens in the nanosecond time scale) and react with fluorophores bearing proton-transfer groups like -OH or -NH2.

Case D) Interconversion rate constants $k_{AB}$ and $k_{BA}$ are very quick compared to the intrinsic lifetimes $\tau_A$ and $\tau_B$. In this case the equations of case C would still apply. But in practice, a quick equilibrium between reactants and product would be established. This means that the concentrations of A and B with respect to each other would always be constant prior to their decay, and hence the whole system could be treated as a single dye. The decay would be single exponential, being an average of $\tau_A$ and $\tau_B$ weighted by their fraction in the equilibrium.

This situation may happen if compounds A and X were directly in contact prior to excitation, for example through ground-state interactions.

Even pure fluorophores in pure solvents may lead to multiexponential decays. This is the case of molecules with strong charge transfer character in polar solvents when undergoing solvation dynamics. In such cases the fluorescence spectrum shifts to longer wavelengths on a picosecond time-scale. Measuring the decay in the blue edge of the steady-state spectrum will lead to a multiexponential decay. The ns lifetime corresponds to the intrinsic fluorescence lifetime of the fluorophore, whereas the ultrafast components (ps) are related to the rate of the shift. Measuring in the red-flank of the steady-sate spectrum leads to multiexponential decays with positive (intrinsic lifetime, ns) and negative (rate of shift, ps) pre-exponential factors. This is depicted in Scheme 3. 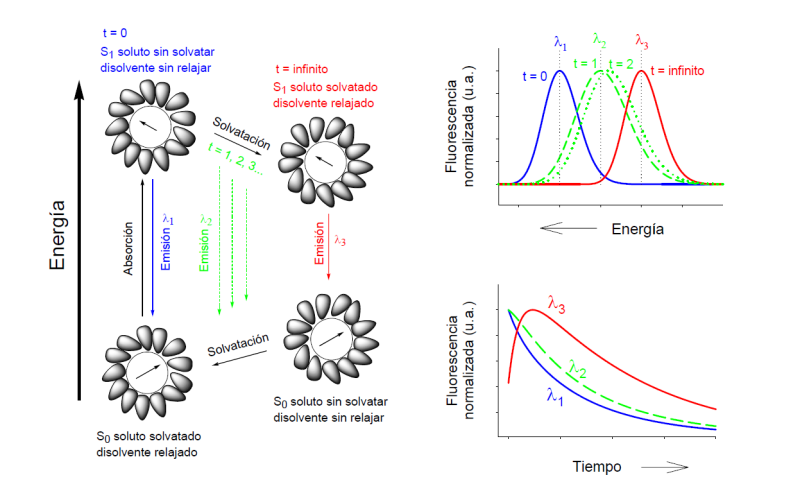 Before the excitation, the fluorophore is in the ground state S0 , which has a characteristic dipole moment. Solvent molecules, which also have their characteristic dipole moment are oriented in such a way that the dipole-dipole interactions with the fluorophore are as favorable as possible. When the fluorophore is prompted to the excited state, its electronic distribution switches almost instantly. At time zero after excitation the solvent molecules remain in their “original” orientation. The resulting dipole -dipole interactions with the fluorophore are hence less favorable. As a result, the solvent begins to relax to solvate the S1 state and brings the system to a more favorable position. Spectroscopically, this is manifested by the time-shift of the emission spectrum to longer wavelengths. Consider that the Steady-State spectrum is the time integral of all those shifting spectra. Measuring in the blue flank (λ1) will lead to a multiexponential decay: the signal decreases because of the shift and the intrinsic decay. Measuring in the red flank (λ3) will lead to a multiexponential decay with a negative pre-exponential factor: the signal first rises due to the increase in signal due to the displacement, and then decays due to the fluorescence lifetime.

In fluid media, solvation dynamics can be described with a multiexponential function spanning from the femtosecond time-scale to tens of picoseconds. Hence, the tail of this process can be monitored with a TCSPC spectrometer equipped with fast detectors such as a MCP or a Hybrid-PMT. In viscous media or at low temperatures, the ps tail component slows down to ns, and the process can be monitored with slower detectors, such as standard PMT.